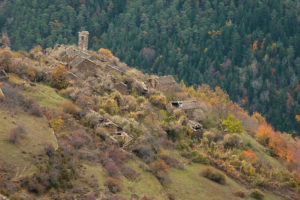 Yesterday I did a quick hiking to Yosa (another abandoned village in Sobrepuerto). Just to strech my legs and take a sunbath. 4km from Oto at 1400m altitude. Nice and easy walk with some water spings on the path to refresh. I also wanted to scout the village and see the possibilites that can offer (gardening, water, access, shelters). It’s a nice location, not too far from near village Oto, not accessible by car directly, but near by there’s a forestal road.

It’s a good place, due to position to south, so will have 90% sun all day. Also mobile signal can be reached in some points from the nearby Oto’s antenna.

The mountain behind north side makes that is covered by heavy winds from north so the winters can be calm and not so cold. Is practically surrounded by high mountains (2000m) from 3 directions so the wind will not make too much trouble. Multiple exit routes also. The only thing that was s mistery for me was the water. All these years visting this village, I couldn’t find a source of water around. So this time I was concentrating in finding one.

But something really strange and amazing happened that day. I was a little hungry, from drinking water from those fresh springs. Demineralized water makes my stomach to get hungry. But my plan was to eat something in Yosa, enjoying the view to the valley. I was a bit tired also, not being in good shape after “winter hibernation”.

So, right before entering Yosa, something strange happen. I felt like I entered into a force field, like an invisible portal into a parallel universe. It was the same Yosa, abandoned, but with more life than usual, or visible from outside. I was many times in that village but never felt so much energy inside and surrounding. Was full of birds sounds, vivid colors, the wind was like whisperring nice words into my ears, a lot of other nice sounds like life livings. Usually that village is very quiet and dry, nothing happen, not even wind. Just a dead village. But now was totally different.

So I sit down for a while, eating a cereal bar and drinking some water, but I felt like all the hunger dissapeared and also felt like charging my body with energy. Really strange feeling that never happen to me like that. 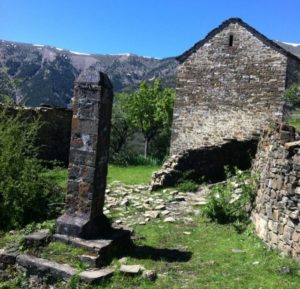 Then I saw a group of intense yellow butterflies, hundreds of them, grouped together in the center of the village plaza, where is an small obelisc. so I went to that butterflies group, it was an amazing experience staying in the middle of so many butterflies. Then suddenly all spread in many different directions, but only 3-4 stayed with me and start moving in the direction to were I supposed to go to find the water source.

I knew that butterflies loves the water so I decided to follow them. It was like a game, but don’t know who really was in control, me or them… And I think that they were in the end, the ones that wanted to take me with them.

So I followed them for a while until I entered into a small meadow, that was revolt by wild boars, the terrain was upside down totally. These wild boars could be good to use them to plow the ground. They did agreat job. So entering in that meadow, there were some arbust and suddenly behind one of these arbust I encountered 6 wild borgs. 3 adults and 3 kids. Right in front of my eyes, at 4-5m distance. They look at me, I look at them in the eyes. Nothing happen. So I let my fear to go and try to calm me down, not to scare them. The mother just look at me and then just sit down with his kids. So I knew in that moment that there’s no fear, no danger, just peace. I salute her with a “good day, how are you” and then I walked away like nothing happen. I heard them in my back saying “groh groh, good day” and I just continue following those 3 butterflies, that they were waiting for me all the time at the end of the meadow.

So they start going forward, showing me the path, between vegetation and spines. In no more than 5 min I start hearing the water falling and the path was more visible. Then a marvelous barranco with fresh water appeared in front of my eyes, all with a very bright light and millions of bird sounds, felt like a sanctuary. I drink some water and was amazing taste, little sweet and refreshing. There were 2 barrancos, water springs coming from top, from the Pelopin peak. I sat there for a while, enjoying the view, together with those 3 butterflies, that never left me. Amazing feeling of peace there, like the whole rest of the world dissapeared, I really felt that I was in a parallel universe. That deep peace, gave me in few minutes a lot of thoughts, ideas, visions, predictions, like unfolding a movie in my head. I was able to see things that were in my head as just thoughts. Impressive experience. My head was like a big computer processing information with a super fast speed. Then suddenly stopped. Just relaxation and peace.

So I decided to go back to Yosa and Oto, being already late. But I saw on the other side of the mountain a small path, really well arranged, almost like a road. So I said, fuck it, let’s see for a while where is going this path. So I continued on that “road” like 300m, but then I saw that was even longer than I thought, going around the mountain. I know that on that mountain there is a small shrine, lost into the forest. But I stopped, with the route in my mind to do it in anotehr ocassion. I need to go there more prepared, also with a camera and a map to identify exactly the position. Interesting location too.

So I went back to Oto, with an amazing feeling. After I get out of Yosa, I had the same strange experience with the force field, but this time the way around, entering in a gray world, almost like dead, no good energy around, feeling like tired suddenly, no birds, no wind, dirty colors. I didn’t paid too much attention, just wanted to get straight to Oto and forget it. But all the way down, couldn’t forget the vivid colors found behind that force field of Yosa. so that’s why I decided to write this post. To be remained written in the history.