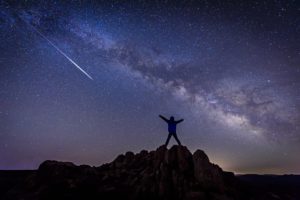 I have to tell you something that happened to me on one of my trips to “La Citadel” in the mountains. Something like this strange and also revealing has never happened to me, an intense experience that I cannot explain.

I have always considered the mountains as a great friend that welcomes me in its arms and protects me, always entering a forest I have felt as if entering my house. Many people are afraid of going into forests, but I have always felt attracted and much safer than in a city. And not because since I was little I have spent several seasons walking through forests and getting used to it, but because I feel this peace and security in the silence of the forest. The sounds of the leaves in the wind, the birds talking to each other, the movement of the trees, have always transmitted this peace to me and also indications of positioning. Also sleeping in the forest is a unique experience, swinging in a hammock and looking at the sky between the branches of the trees, breathing the pure air that the forest emanates, also in the early hours of the morning, it is clear as oxygen It comes out going up, sometimes you can get dizzy.

Well one day, going down the slope towards “my citadel”, which is located between two ravines with streams, and is the beginning of a very beautiful valley, full of pine and oak forests, with several silent paths under the trees, with dense carpets of leaves that cushions your steps and maintain the freshness; Approaching the place, I have begun to feel something strange.

Until then, the road was normal, a normal day, a little hot but holding up well. Suddenly about 100m before reaching the destination, a strange wind began to move all the trees around, as if they were leaning towards me. He thought I’m hallucinating from thirst and I sat on a rock to drink water and breathe a little. The airs were still continuing and this time with the leaves on the ground, almost creating a circle around me. I could not believe it, I stayed a little more in the shade thinking that it is just a dizziness, but it was not this. I know my body very well and I know when it is tired, but this time it was not tired or thirsty, nor the heat that played me.

It began to feel like an energy welcomes my body giving me “goose bumps” and pushed me to go forward to destiny. I got up and finished the last 100m and entered “La Citadel”. All these last 100m I was crying and I didn’t know why! The tears came out like jets without realizing it, see they came as if something came from inside me, I don’t know if it was happiness, fatigue, sadness or pain or all at once. Something very strange and at the same moment I felt like something like a God was looking at me and smiling at me. I swear to you that I have never felt anything like this in my life, that presence so welcoming but at the same time very powerful, my legs were shaking with emotion. It was not like that God of the Bible, the story, it was something much more, like an enormous energy, the entire Universe, I don’t know how to describe it.

Everything became a madness of sounds: birds and small animals began to “welcome” me with a screeching of sounds, as if they had been waiting for me for a long time, all the trees began to move in an elegant dance in front of me but it was only the trees inside the enclosure, not the ones outside. Incredible welcome they have given me! I felt so small compared to so much power of the mountains and nature. Or maybe I have found a way to see and communicate with the Universe, or I have found a door to another dimension, to another invisible world for the dying, I don’t know but something happened. He was lying on the ground crying like a fool and listening to the “concert” around him, even the river next door had like a melody.

There was an intense sense that I was in the perfect place for me, in harmony with the energies and frequencies of the Universe. I have been almost 1 hour lying on the ground and accumulating that energy, and looking at the perfect blue sky.

Before getting up from the ground, I felt someone looking at me. I turned my head and behind me there was a young wild boar, sitting about 10m from me, looking at me, making no sound, just looking at me with eyes as if I were a child, happy to see me. I have never been afraid of wild animals and have tried to come into contact with them. I greeted him with a calm voice and he responded with a short “groh-groh” getting up and going on his way. What a meeting.

The night was another marvelous show …

Sitting in the hammock, with a very good temperature, neither cold nor warm to cover me with the awning, I was looking at the stars, in total silence, no wind, no birds, no leaves, nothing at all, even the river seemed like this stopped. Each time gazing closer at the stars, it became as if it were more and more and the Via Lacteea formed in the view and gave an impressive sight. There were a few small meteorites falling like shooting stars, but not as many as in the Perseid season. I just felt like traveling through the stars, my body was like I was flying, I didn’t weigh anything. at one point, I looked “down” and saw my body in the hammock sleeping peacefully, I did not see the mountains, only stars around and an immense peace. I knew I’m not dreaming, I clearly felt the flight with maximum speed through the stars, I could even see other constellations that I have never seen before (maybe it was on the other side of Via Lacteea).

I have “been” flying like this until dawn, around 5-6 in the morning. I don’t know how I got back into my mortal man’s body, but I could clearly see the return trip, watching as I approached the hammock where the body was. Of course I felt like a traveling starseed. It may be that the Masters of the Universe have given me only one test, a spoiler of what the life of a starseed could be like.

What an experience, that I cannot explain it to myself and it may be that many people consider me crazy, I do not care, but it is my own experience, unique and I know that I have seen and felt, no one can take these facts away from me. Believe it or not, it doesn’t matter, but now I know what it is …